Scouts of Qatar participated in the World Scout Camp on Air and Internet 2021 JOTA  JOTI, which took place on the 15th and 16th of October in cooperation with radio amateurs where the Scouts of Qatar communicated with the brothers and friends of the Scouts of the world through the wireless station set up by the Association in a camp for every spring, a flower.

JOTA JOTI represent two official events for the World Scout Organization, where scouts around the world meet during the end of the third week of October every year for 48 hours in which they debate and exchange experiences and knowledge using various technologies available locally in cooperation with radio amateurs in their countries with the aim of making friends with Scouts around the world and to learn more about their countries, cultures and Scouting life.

This event represents an opportunity for our Scouts to learn about the importance of communications and its role in serving humanity, and the role of the wireless and Internet hobbyist in being an ambassador for his country, informing others of his cultural, civilizational and human heritage.

Many activities were held within the camp’s activities which began with raising the flag, saluting it and chanting the national anthem.

The camp contained a dialogue session under the title "Scouting and the Sustainable Development Goals", the participation and exchange of ideas and experiences between the scouts took place from 172 countries from the world and with more than 2 million Scouts around the world.

The general commissioner Mr. Jassim Mohammed Al-Hardan said that the camp was full of entertainment programs and the participants received  certificates of participation in the JOTA-JOTI global camp. He also expressed his deep thanks and appreciation to the leaders of the Qatar Scouts and Guides Association for creating the best atmosphere in this purposeful camp. He also extended his thanks to  the group of trainers and technicians from the Wireless Amateurs Association and the Qatar Scouts and Guides Association. 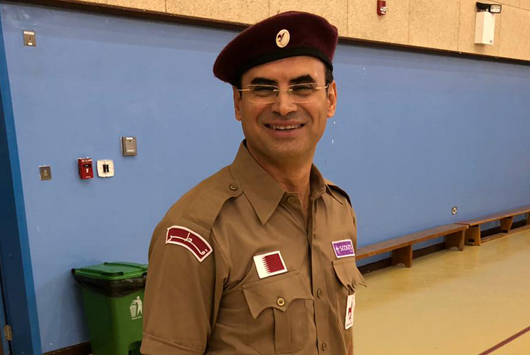